For eighteen months, the Catholic Church has used a new translation of the Roman Missal, a translation meant to be used not only in North America but Great Britain, Ireland, South Africa, Singapore, China and other countries whose idiomatic English differs greatly from our own. In the run-up to its adoption, parishes conducted workshops and distributed explanatory texts to prepare us for the dramatic change in the prayers we had become accustomed to.

At a workshop in our parish, opinion was clearly divided. Some argued that the return to an elevated language was a mistake, a turning back from the advances of the 1960’s and 1970’s. Others welcomed the changes in general but objected to particular words or phrases.

At the first Mass with the new translation, my doubts were erased. The words soared. Layers of meaning were exposed as clause built upon clause. And long-forgotten phrases, set aside so many years ago, came back with an unexpected freshness. I wondered why I was so taken with the revised language but had no clear answer until I acquired The Beauty of the Word by Anthony Esolen. His work examines the principles of translation, the oratorical strategy and many of the scriptural references. 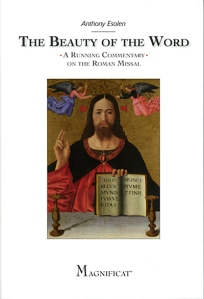 Cover page of The Beauty of the Word, published by Magnificat

I found the key  to understanding my fondness for this translation in Esolen’s explanation that the sentence structure was designed with the demands of oratory in mind. Oratory requires “repetition of key words, parallel structures in grammar and sense, balance of idea with idea and image with image, and – something that people unused to oral poetry do not suspect – a minimum of full stops that interrupt the flow of declamation and meaning.” He cites the examples of Homer – who composed with his mind, voice and ear but not his hand or eye – and Martin Luther King, whose long sentences exhibited the balance and repetition familiar from the writings of Jeremiah and Isaiah. In an arresting image, Esolen describes a series of four simple declarative sentences as “disconnected boxcars bumping into each other on a track.” The sense of the progression is most easily acquired when the sentences are connected, like boxcars pulled by the same engine.

Esolen’s explanation makes sense to me because it fits with my recent experience. In the past few years, I have memorized passages of 800 and 1400 words, to be recited – without visual aids of any sort – in Knights of Columbus ceremonies. With no background in drama, I was expecting the process to be an ordeal. Instead, memorizing and delivering the long passages has been a pleasant experience. The passages employ parallelism, imagery and repetition to great effect, making it easy for the speaker to memorize and the listener to follow.